Why You Need To Replace Your Cracked Windshield. TODAY!

It’s important to know the benefits of replacing your damaged auto glass.

Air bags depend on them!

They're the most common insurance claim!

It used to be an optionally luxury!

We Are The Best In Auto Glass

Call us: 251-348-1852
chambersautoglassllc@gmail.com
We Serve All Of Baldwin County, Alabama

When faced with replacing a windshield, many car owners default to the lowest-price option. But if you take this route and are in a serious accident, your decision could cost you your life.

An incorrectly installed windshield could pop out in an accident, allowing the roof to cave in and crush the car’s occupants. Furthermore, when the front airbags deploy, they exert a tremendous force on the windshield and will blow out one that is not firmly glued in place.

“There are a lot of schlock operators” installing windshields, says Debra Levy, president of the Auto Glass Safety Council, which offers certification for installers. She says using original manufacturer’s glass is a plus, but choosing a good installer is even more important. Certification is valuable because it keeps installers up to date on advances in adhesives and changing automotive designs.

Rob Chambers, our founder at Chambers Auto Glass, in Baldwin County AL, installs at least eight windshields a day and has been working in the auto glass business for over 32 years. Rob agrees that certification is important and warns that there are many “tailgaters”, installers with no brick-and-mortar shop, who quickly “slam” windshields into cars with little regard for safety. They don’t handle the windshield correctly, don’t use the proper adhesives and leave the car unsafe for driving and prone to rusting and leaks.

“The thing I wish that drivers knew was that the windshield is the No. 1 safety restraint in your vehicle,” Rob says. The windshield is two sheets of glass held together by an inner layer of strong vinyl. When the windshield breaks, the vinyl holds the glass in place rather than allowing the shards to fall into the car and cut the occupants.

The windshield is a layer of protection that “keeps you inside the car and things out of the car,” Rob says. “This is not the place to cut corners on and go with the cheapest price.”

Steve Mazor, the Auto Club of Southern California’s chief automotive engineer, adds that if the windshield isn’t strong enough and an occupant is thrown from a speeding car, “the odds of survival are much less.” Thirty percent of all fatalities, he says, are due to people being ejected from the car.

An investigation by the ABC News program 20/20 on windshield safety shows technicians incorrectly installing windshields by not wearing gloves. The grease from their hands prevents the adhesives from bonding correctly, Rob explains. Another error that 20/20 caught was technicians failing to use all the necessary bonding agents, such as primer.

When you are looking for a good windshield installer, Rob recommends calling three shops and asking a few qualifying questions beyond just price and certification.

Most windshield installation jobs take only about an hour and can be done at your home or office, Rob says. Once the installer is finished, check for signs that the job was completed correctly. Make sure the molding is straight and that there is no sign of adhesives visible inside the car, Rob says. The car should be clean inside. Debris or dirt left in your car could be the sign of sloppy workmanship.

Rock chips, which are also fixable, are easier to repair when the damage has just occurred. Over time, rain washes dirt into the crack, making it harder to seal. We suggest carrying a roll of clear tape in the glove compartment to quickly cover a crack until it can be fixed.

Usually we injects polymer into rock chips and cracks. After the polymer cures, we smooth the area so it doesn’t affect the travel of the windshield wipers. If the repair is completed within a week of the damage, generally will make it disappear.

Windshield repair kits are available at automotive stores for the do-it-yourselfer, but they don’t do the job as well as the professionals can do it. We have all the equipment and much more experience.

The Auto Glass Safety Council’s Levy says studies show that windshield rock chips or cracks that are in your field of vision can actually slow your response to emergency traffic situations. She also says that old windshields that are pitted or hazed should be replaced — even if they are not broken — since they can magnify the glare of the headlights from oncoming cars at night.

Rob says that a new windshield might be cheaper than you would think. In many cases, windshield repair is covered by car insurance. The deductible for most coverage is sometimes only $50 or $100, so that would be the cost of a new windshield.

Broken glass can become security risks. You could be inviting criminal elements in your vehicle simply because they see the broken glass as a point of easy access. To keep that from happening, make sure to go for Chambers Auto Glass for help right away.

Why you should change or repair your windshield if it is damaged.

Regardless of where you live, your windshield may take a beating. There could be pea gravel falling from uncovered construction trucks, sanitation vehicles laying down salt and sand when the weather calls for it and the occasional chunk of unknown debris kicked up by cars passing by.

If your vehicle’s windshield gets chipped or cracked, should you repair or replace it? Regardless of where you live, your windshield may take a beating. There could be pea gravel falling from uncovered construction trucks, sanitation vehicles laying down salt and sand when the weather calls for it and the occasional chunk of unknown debris kicked up by cars passing by.

What is the difference between a chip and crack in a windshield?

Minor windshield damage normally comes in two major forms – chips and cracks. A chip is generally damage in the windshield that clearly marks the point of impact by debris. This point of impact can be in the form of a star break (short cracks forming outward from the center), bulls-eye (circular), partial bulls-eye (half-moon shape), crack chip (small crack less than _ inch), or pit (gouge). Cracks create a distinct line in the glass that can range from under an inch up to the width of your windshield. They generally run horizontally in a straight or somewhat wavy line.

What makes us THE BEST AUTO GLASS COMPANY in Robertsdale, Alabama?

We pride ourselves in offering the most affordable pricing in all of Robertsdale, Alabama

We Drive To You FREE!

Our technicians will drive to you anywhere in the Baldwin County, Alabama area for FREE. That’s a great deal!

We have over 32+ years of Auto Glass experience and are AGSC Certified technicians! 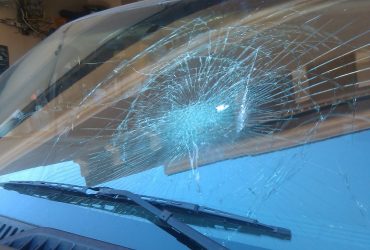 It happens to everyone! A big truck kicks up a big rock and it cracks your windshield going 60. Let’s get that annoying crack patched! 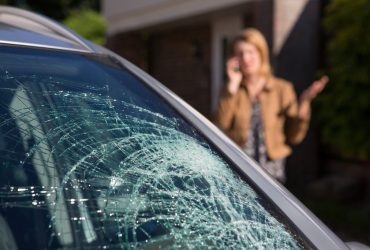 We are experts in chip auto glass repairs. If your windshield got a chip or any similar damage we will make the drive to you free.

Long Cracks often occur when you already have a small crack, water seeps in and it freezes. Get your glass repair today!